Jobs & placements directly from the industry 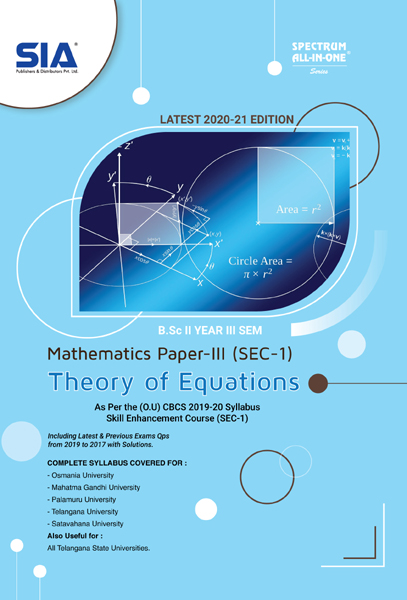 General Properties of Polynomials Graphic representation of a polynomial – Maxima and minima values of polynomials – Theorems relating to the real roots of equations – Existence of a root in the general equation – Imaginary roots – Theorem determining the number of roots of an equation – Equal roots – Imaginary roots enter equations in pairs –Descartes’ rule of signs for positive roots – Descartes’ rule of signs for negative roots.

Roots and Coefficients of Equations Relations between the roots and coefficients – Theorem – Applications of the theorem – Depression of an equation when a relation exists between two of its roots – The cube roots of unity – Symmetric functions of the roots–examples.

This book will be added to your My Books. Do you want to continue?

Your Free trial Limit Exceeded.Would you like to buy it?

Thanks for your mail conformation. Your account will be activated Soon.

For any queries write to support@ulektzbooks.com

Go to Home Preceed To checkout

eBook successfully added to your My Books

You'll use this number and email id when you log in and if you ever need to reset your password.

You'll use this number and email id when you log in and if you ever need to reset your password.

This book will be added to your library. Do you want to continue?